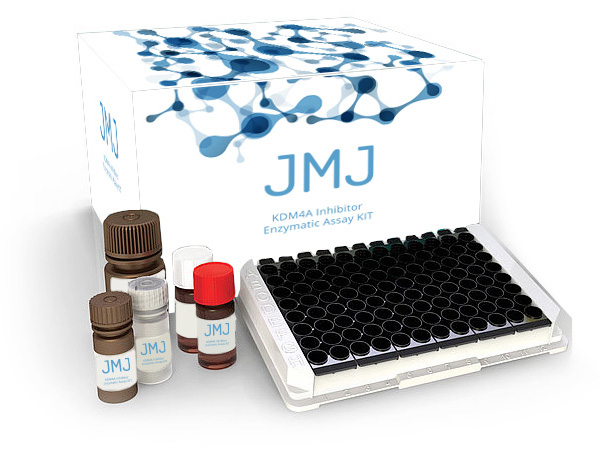 Histones are targets of several post translational modifications (PTM) as methylation, acetylation, phosphorylation and others, which can modify the chromatin structure and accessibility. Actually, methylation is the pivot of many processes involved in cell differentiation, homeostasis and diseases. (PMID: 26405197; 23160372; 25537518; 25535400). This processes takes place mainly on arginine/lysine residues mediated by several enzyme that share a common evolutionist portion.

Over 20 human histone Nε-methylated Lysine residue De-Methylases (KDMs) have been identified, with many exhibiting deregulated expression patterns in disease (PMID: 22473470). As with the Lysine Methylases Transferases (KMTs), 4 5 emerging evidence suggests that some KDMs are required for tumour growth. Consequently, KDMs have emerged as interesting new targets for therapeutic intervention. KDMs are classified into two subfamilies.
Members of the first identified subfamily, the KDM1 subfamily (or lysine- specific demethylases, LSDs), are related to the well-characterised monoamine oxidases (MAOs) and utilise the cosubstrate flavin adenine dinucleotide (FAD) during catalysis of demethylation (PMID: 15620353; PMID: 22473470) The second subfamily, that JmjC domain-containing, represent the larger KDM class, comprising about 20 human enzymes which are grouped into five subfamilies (KDM2/7, KDM3, KDM4, KDM5, and KDM6) (PMID: 16983801). JMJ demethylation lysine residues through N-methyl hydroxylation and require cofactors as Fe2+ and a ketoglutarate. Specifically, the oxidative decarboxylation converts the Fe2+ in Fe4+ which inserts an oxygen atom on the methyl group, make an unstable intermediate which leads to the synthesis of the compound de methylate and formaldehyde.

One of the major sub-families JMJD consists of proteins JMJD2A-D, also known as KDM4A-D, which catalyse the methylation of H3K9 residues me2 / me3 (histone lysine de-metylase). KDM4A, B and C have a n-terminal domain Jumonji n (jmjn) and JmjC domains, followed by a homodomain c-terminal (PHD) and domains tudor. While KDM4D lacks the n-terminal region, including the PHD and domains tudor. (PMID: 26101715) Recent studies show that several histone de-methylase are deregulated in cancer. Their implications are correlate with: i) oncogenes expression activation; ii) tumor suppressor silencing; iii) chromosomal stability alteration; iv) hormone receptors interaction. In fact, it has been demonstrated an over expression of kdm4 in various cancers, such as breast, prostate and lymphoma.

The lowering of KDM4D in HCT116, colon cancer cells, revealed that KDM4D is a pro-proliferative enzyme, which shows for the first time a physiological role for this demethylase. Emerging evidence impute to KDM4A a crucial role in tumour initiation, progression and destiny. Kim TD et al correlated KDM4A overexpression to Gleason score in a positive manner in human prostate tumours. Moreover, KDM4A overexpression is implicates in development of prostatic intraepithelial neoformation. Those results highlight the KDM4A initiate prostate cancer potential (PMID: 26731476). KDM4A is highly expressed in several human cancers like breast where repress the tumour suppressor ARHI (PMID: 24886710). KDM4A Inhibit Sp1 expression pattern in breast cancer, increasing the probability of metastasis.( PMID: 25193278). Consequently, the synthesis and the search for potent inhibitors of these enzymes is most importance to the development of potentially.

Epi-C KDM4A Inhibitor Screening Assay Kit is a very strong and roboust fluorescence-based method. Double chemistry steps are the base of the assay.. KDM4A activity evaluation is done by reading a fluorescent compound synthesized in situ. In particular, KDM4A demethylates the substrate and makes the formaldehyde as reaction product, as showing in Fig. 1.
This product in the presence of ammonia and acetoacetanilide synthesizes a fluorescent compound, which is reading at excitation wavelength of 370nm and emission wavelength of 470nm. When a compound is really inhibitor, this stops the KDM4A activity, then the final fluorescent compound is not synthesized.

Great opportunity services to evaluate the activity of your drug